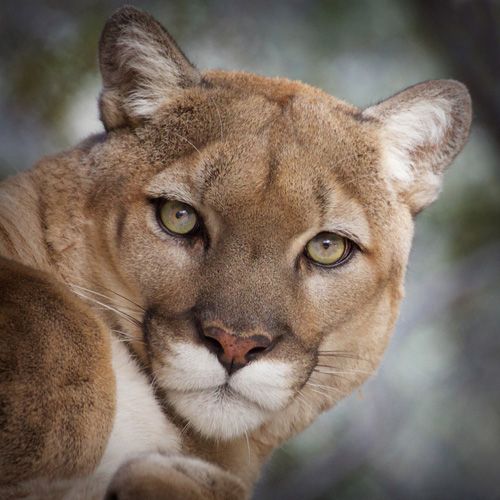 Tocho was orphaned in 2005 when his mother was shot by a poacher.  He wasn’t even old enough to be weaned from his mother’s milk when the poacher sold him to two young men.  The men thought he’d make an interesting pet, but didn’t want anyone to find out they had a mountain lion kitten, so they kept him in a dark shed where he was deprived of sunlight.  They had no idea how to feed a growing baby mountain lion.

Luckily, Tocho was discovered, confiscated by the Arizona Game and Fish Department, and brought to Southwest Wildlife for care.  His initial health assessment was shocking.  He had three broken legs and a crushed pelvis; his improper diet caused metabolic bone disease, making his bones weak and fragile.  The only way he could move about was to pull his body across the floor using his front legs.

It took many months of care, and working with a nutritionist who developed a special formula to rebuild Tocho’s bones, before he was able to use his legs.

For 16 years, he was a happy and healthy big cat. His legs were short when compared to his body size, but he got around quite well. Tocho never missed a tour and could often be heard purring to those lucky enough to be in the front row.

On July 12, 2021, Tocho crossed over the rainbow bridge. Thank you for your sponsorships, your support, and your kind words over the years that allowed Southwest Wildlife to give Tocho the peaceful life he deserved.