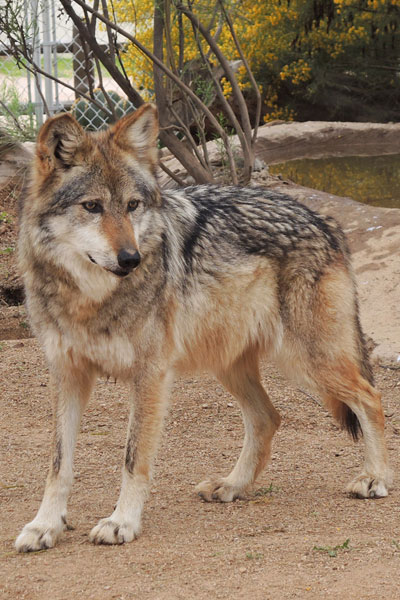 Mexican gray wolf F891, Chooli (pronounced "Hooly") was born at the Columbus Zoo in 2004.  She was one of a litter of seven puppies.

She lived most of her life at the California Wolf Center in Julian, California, many of those years with three of her sisters.

She came to live at Southwest Wildlife in September of 2015.  She's a gorgeous and wild wolf.

Chooli welcomed male wolf, M877, Ghost, into her home after his arrival.  She and Ghost enjoyed people-watching from the large wolf enclosure near the Ramada.  They were a great match and we were thrilled that she had a companion to share her life with.  Unfortunately, Ghost passed away in January of 2020.

Chooli was named by a long-time donor and supporter of our sanctuary.