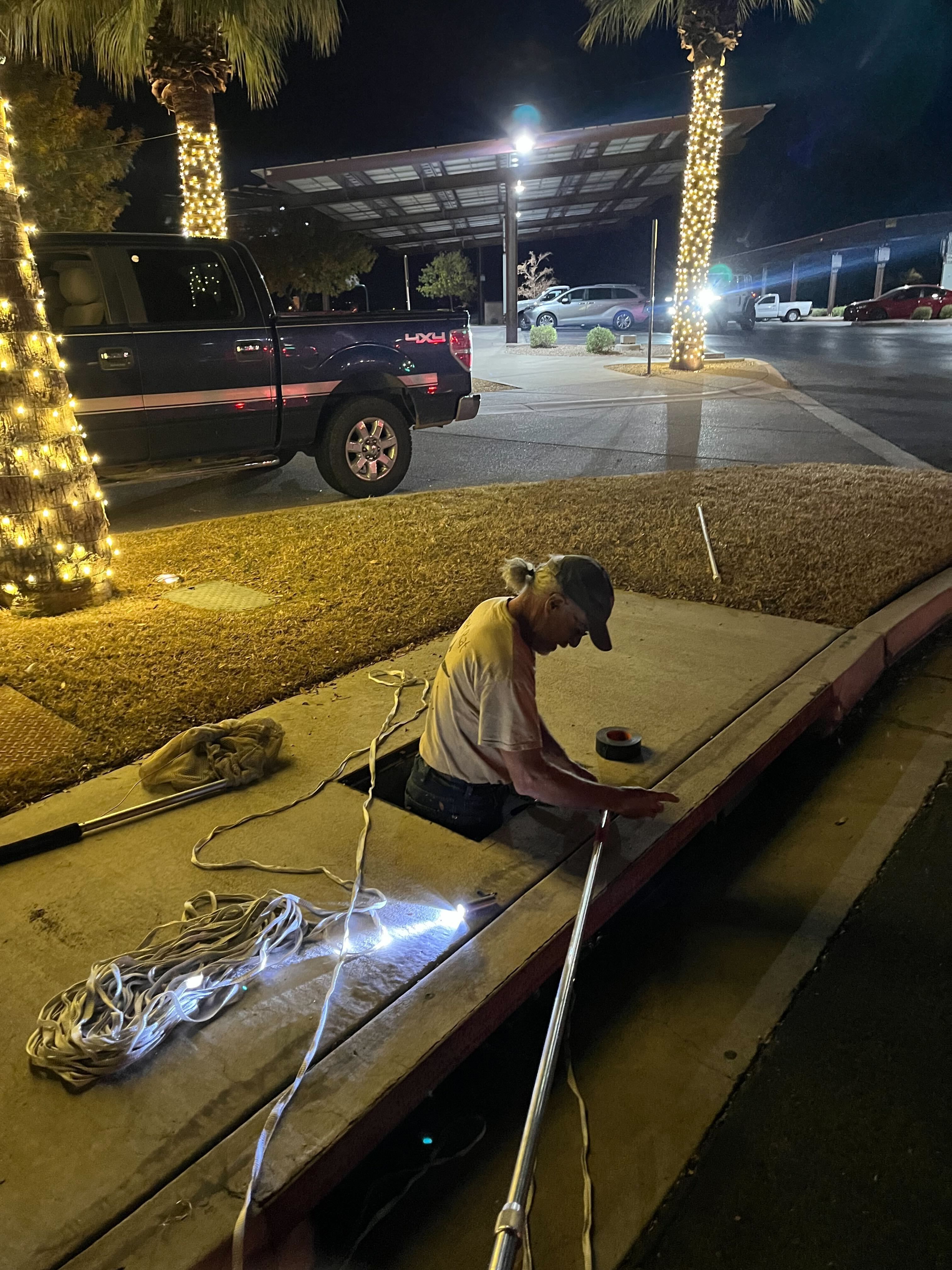 This weekend brings another new year. An opportunity to reflect, dream, and hope. For the rescuers at Southwest Wildlife, a new year brings more of the same: animals who need their help. Grab a box of tissues - this story might bring a tear or two to your eye.

December 27, 2:29 PM
The Wildlife Emergency line received a call from a Goodyear resident that reported a limping raccoon, struggling to move. The Good Samaritan caller had eyes on the furry neighbor - and promised to keep watch until a rescue could arrive.

3:15 PM
Rescuer Ajay hit the scene. Unfortunately, in the delay, the raccoon had limped his way into a storm drain to hide. Ajay realized he had worked his way 15 feet into the narrow drain. Too far away for a rescuer to reach by hand - without backup, that is.

5:40 PM
Rescuer Paul arrives with different tools to try to coax the raccoon out of his hiding place. Paul lowered himself into the drain as much as he could to attempt to reach him. Still no luck, even with a long catch pole.

6:22 PM
Forecast: Rain. Still the raccoon evaded capture, even with two trained, experienced rescuers on the scene. Ajay and Paul began to worry - if and when it rains later that night, the raccoon might drown.

7:30 PM
Rescuer Cris joined the effort. The smallest and "squirreliest" of the rescuers, she thought perhaps she might be able to fit in the drain. Alas! Even our lithest volunteer couldn't reach the evasive, injured raccoon.

7:48 PM
With a burst of creativity, Paul and Ajay constructed a "staircase" out of cardboard boxes and milk crates that led out of one end of the drain. They left a holiday feast fit for the king of raccoons: sweet dates and tasty cheddar cheese.

11:59 PM
Cris returned with a couple of humane traps - filled with tasty snacks. When she looked into the drain, the little fellow had moved closer to the exit and was sleeping - just out of reach. Rain would fall in the next couple of hours. If only they could warn him!

December 28, 1:30 AM
Ajay returned to the scene after a brief rest. Still no raccoon. Ajay began his vigil in the rain - making sure the raccoon was alive, and periodically trying to convince him to get into one of the traps.

6:30 AM
RESCUE SECURED. After five hours in the winter rain, on all fours, in and out of a storm drain entrance, Ajay caught the raccoon. He was completely soaked head-to-toe in rain water and drain water - but the raccoon was safe. Rescuer Daphne stepped in and offered to transport the raccoon to Southwest Wildlife's animal hospital since Ajay was in dire need of a shower and some sleep!

8:46 AM
The raccoon was safe at the Southwest Wildlife medical clinic in the caring, capable hands of Clinic Manager Jeanette. Daphne was headed home to air out a particularly smelly car. Ajay made it home safe to enjoy a well-deserved rest. Before he shut his eyes, however, he had this to say to the rescue team (edited for clarity):

"Paul and Cris inspired me. At the beginning I was hesitant to get into the storm drain. It smelled pretty bad. Over that it's dark. They both didn't hesitate to crawl in and rescue. Their ideas on putting the long pipe together, building stairs and setting traps were amazing. I followed their lead and did my part.

Reflecting on it, so many things had to come together. Nancy calling Paul for timely help. We both tried for a couple of hours, just about to give up, then Cris showed up. We tried a couple of hours... couldn't rescue. We were so disappointed.

We were also racing against time. So we didn't have the option to come the next day in the morning and try again. The rain was going to start at 3:00 AM and flood the drain, so our options were limited. We thought of using the trap, but we would have to remove it once it started raining so he wouldn't drown in the trap. Luckily it wasn't pouring rain. The raccoon was able to crawl back when the water started flowing slowly... had he chosen to go the other way, he wouldn't have survived. The opposite exit leads into the city sewer.

It's truly an amazing story. Sometimes it takes a monumental effort to save one life. And it only takes one tragedy to take it."

10:07 AM
Ajay was more right than he knew. Sometimes, tragedy wins, despite the teamwork of caring people. Clinic Manager Jeanette notified the rescuers and staff that the drain raccoon did not survive his injuries. She had this to say in her announcement:

"You all did an amazing job with the drain raccoon. Unfortunately, his wounds were a lot worse than we thought. On top of his visible injuries, exposed and broken bones, and dehydration, the little guy was suffering from an infection that ultimately claimed him. I was able to resuscitate him twice, but on the third round it was time to let him go. Just know he was not alone. He passed in a warm, dry place with people who cared for him. I'm so sorry for this loss."

Reflecting on 2022, it's been a year of great sorrows and great joys. Many lives saved, and some lives lost. At Southwest Wildlife, much remains the same year after year. Every life is worth saving, and dedicated people are always here to carry out our mission: to save our wildlife, one life at a time.

And through it all, you're here too. Reading the stories of the animals. Giving jars of peanut butter so the black bears will take their medicine. Sharing our posts on social media to help your friends and neighbors know what to do if they encounter wildlife in need. Spending your invaluable time crawling into storm drains to save animals, or cleaning enclosures, or guiding tours as a volunteer. Giving out of the goodness of your hearts and the kindness in your souls.

Thank you for being a part of Southwest Wildlife. None of this work is possible without you. The humans of Southwest are again in awe that we get to be here for another year. All because you care.

We wish you the happiest New Year of them all, filled with joy and laughter, peace and kindness, love and care. Cheers to 2023!