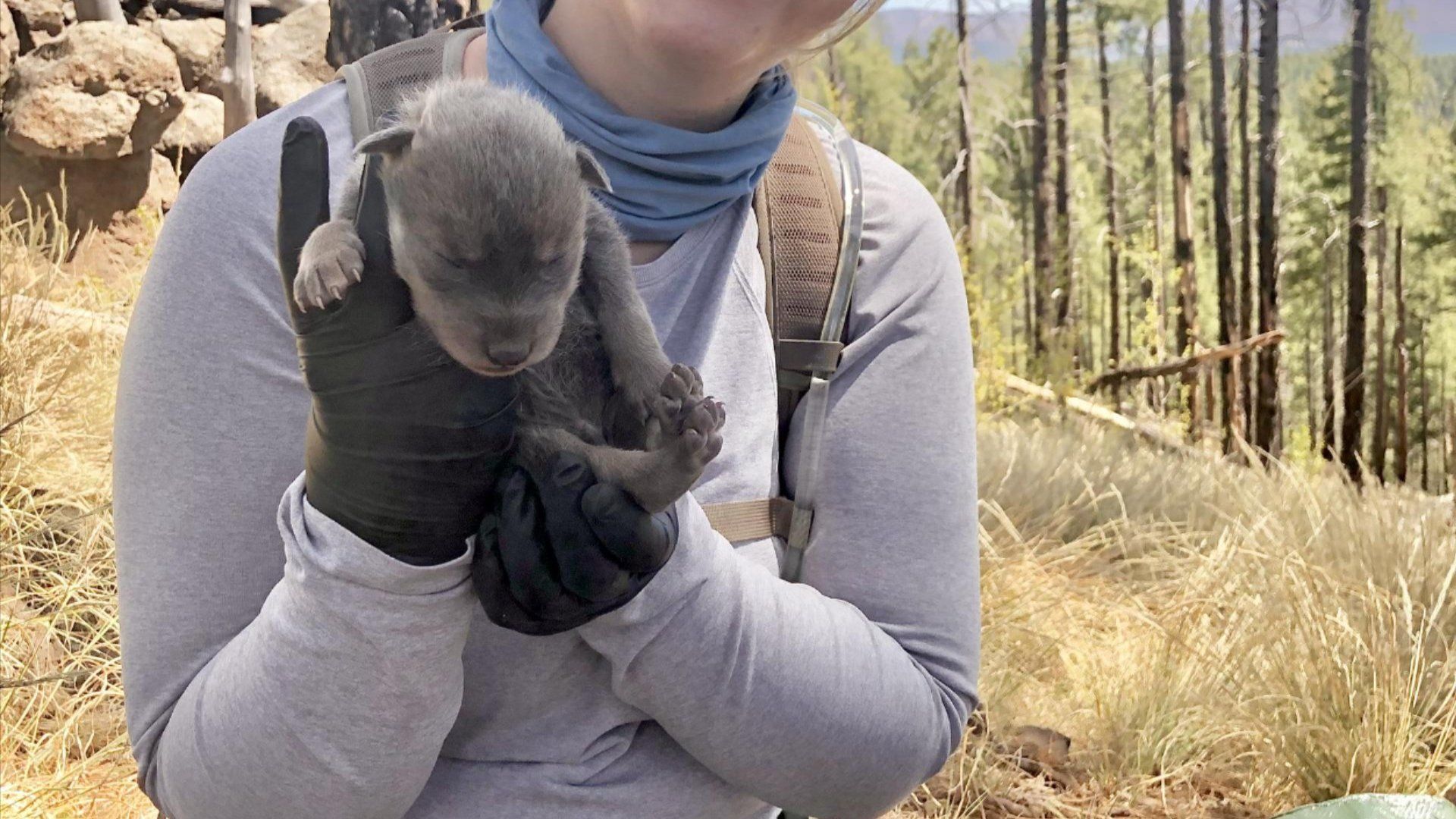 And now for the story you've all been waiting for! The story of two Mexican gray wolf pups born at Southwest Wildlife - now living wild and free as part of the Rocky Prairie Pack right here in Arizona.

You might be thinking, "Wait, there's no breeding at Southwest Wildlife." For the most part, you're right. Southwest Wildlife doesn't buy, sell, trade, or breed rescued animals like coyotes, bobcats, javelinas, skunks, raccoons, mountain lions, black bears, or foxes. The Mexican gray wolf, however, is a critically endangered species under the jurisdiction of the U.S. Fish & Wildlife Service (USFWS). So when Melly and Moonlight, two 11-year-old wolves who had never bred before, arrived at Southwest Wildlife, USFWS wanted to make one last attempt to bring wolves from their gene pool into the world.

The odds were not in their favor. They had never bred before, and as such Melly had never been pregnant or raised pups before. But on February 18, 2022, the two lovebirds (lovewolves?) conceived a litter.

The next few months were cautious at Southwest Wildlife. Melly and Moonlight received ample quiet and privacy while the possibility of a pregnancy progressed. Staff and volunteers monitored their behaviors and recorded data from in-person observation shifts as well as camera recordings. It very well could have been that Melly was experiencing a false pregnancy - but to give her as high of a chance of success as possible, we did not do anything whatsoever to cause her stress (such as a trip to the clinic for an ultrasound). So we had to just wait.

We are so excited to share that two months later, on April 30, 2022, the two beautiful pups (soon-to-be cross-fostered) were born. One female, one male.

The USFWS, Arizona Game & Fish Department (AZGFD), and Southwest Wildlife staff made the challenging decision to cross-foster both pups into the wild. While Melly's and Moonlight's loss weighed on our hearts, the best decision for the species was to get these babies out into the wild.

Many factors went into this decision. One major factor was that Melly had never raised pups before, so the likelihood of her pups' survival was highest in the wild. The other was that wild packs critically need genetic diversity - something these two babies can provide for the future of Mexican wolf conservation.

On May 6, the two babies underwent a veterinary examination before boarding an AZGFD plane to make the short journey to the wild. Both wolves were found to be in good health with high chances of wild success!

Upon arrival in northern Arizona, AZGFD took over for the pup placement. They had located a den with pups of a similar age, and set out to show the babies their new home.

Before placing captive-bred pups with wild mothers, a lot of care is taken to make sure the new pups smell like the other ones. They rub them on each other and rub them in nearby dirt so they do not face any difficulty being accepted into the pack.

We are thrilled to report the cross-foster attempt was successful. AZGFD field agents will continue to monitor the pack from a distance and report on their activity, further ensuring the greatest chance of success for this keystone species.

So many stars had to align for these treasured lives to be born. Because of your generosity, support, and love of wildlife, Southwest Wildlife was able to make our first foray into this aspect of wolf conservation. We are extremely proud that out of only 11 baby wolves cross-fostered in 2022, only two were released in Arizona - and those two were born right here in the sanctuary.

You should share in that pride. To give Melly and Moonlight the peace and quiet they needed, staff made the decision to fully cancel tours for 2 weeks - the week post-birth, then a week post-cross foster. Thanks to your generous donations, this loss in revenue was not a huge hit to the budget. You made this effort possible. You gave Melly the space she needed to recover, and most of all - you put two wolves into the Arizona wilderness that wouldn't have been there otherwise.

While Southwest doesn't currently have the facilities to support extensive participation in the breeding aspect of the Mexican Wolf Recovery Program, you can look forward to increased activity to carry forth the legacy of Arizona's wolf in the future.

Join the Movement to Save Wildlife

**Update**
Around 4-5 days after the pups entered the wild, Melly and Moonlight returned to their normal routine. We are happy to report they are no longer exhibiting stress behaviors, and can be seen frequently napping together in their favorite spot: atop one of their wooden "dens" in the shade.