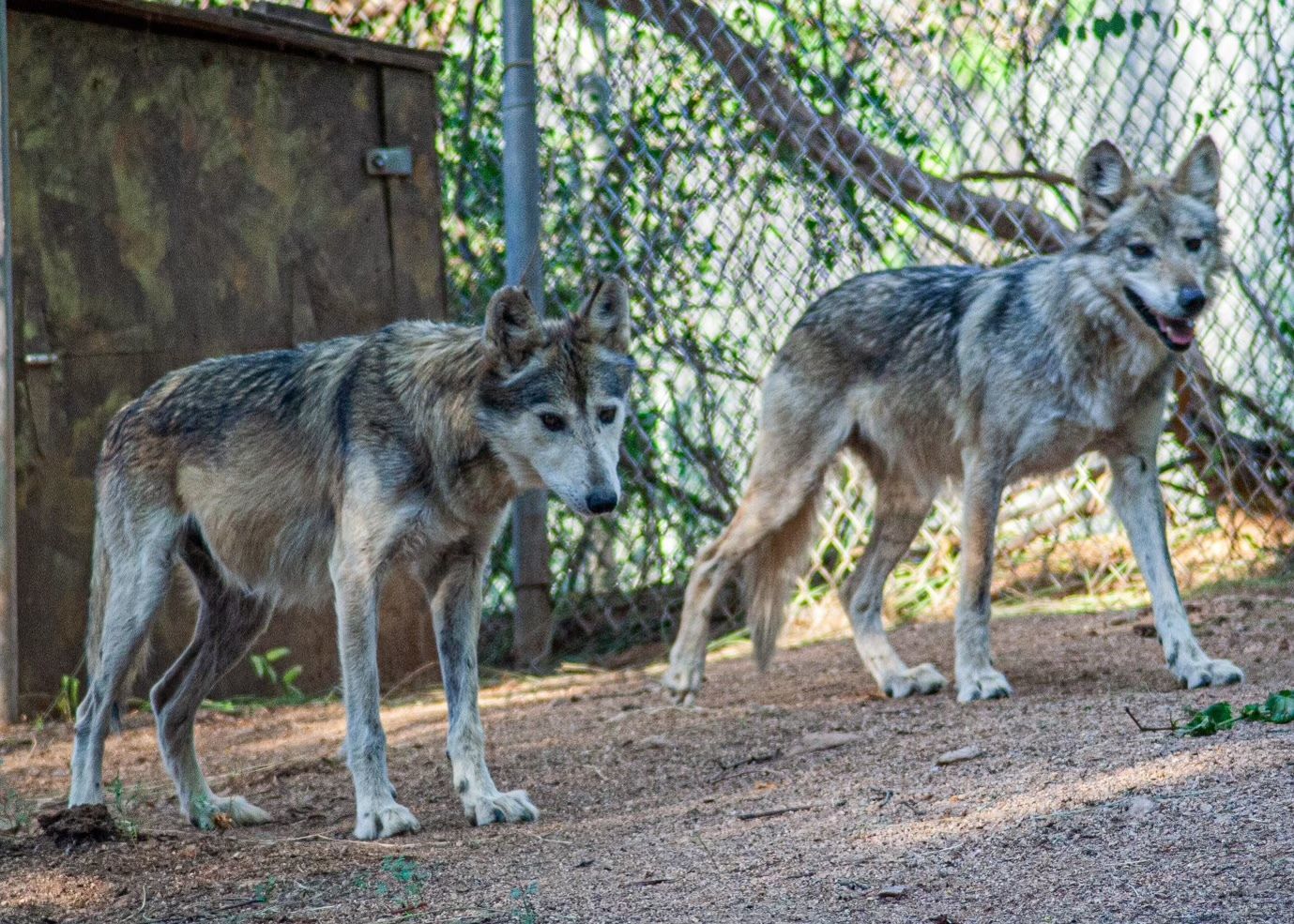 In September of 2021, Southwest Wildlife welcomed two wolves into the sanctuary as part of the Species Survival Program (SSP) for the Mexican gray wolf. We proudly partner with the US Fish & Wildlife Service to conserve the future of this keystone species.

As of the writing of this article, Southwest Wildlife houses 11 Mexican gray wolves - and receives no state or federal funding. Because of your support, the wolves - and all the animals at Southwest - are always fed and cared for.

F1217 was born in 2011 at the USFWS MGW facility located at the Sevilleta National Wildlife Refuge in New Mexico. Her parents, M968 and F1064 produced two litters of pups (in 2010 and 2011 – 10 pups!) and the entire multi-generational family was considered for release at one time. Unfortunately, that did not happen.

In 2013, the family was broken up and F1217 was sent to California Wolf Center, Julian, CA, on a breeding recommendation.

At the same time two of her siblings, F1219 (Cinderella) and F1204 (from the 2010 litter) were transferred to Southwest Wildlife. F1204 was sent to the Arizona-Sonora Desert Museum (ASDM) in Tucson in 2015 and is still there. Cinderella lived at Southwest Wildlife for 5 years before she was transferred to California Wolf Center in Julian, CA, in 2018 to replace her sister F1217 in the breeding program. Cinderella was a very successful breeder and some of her pups were cross fostered into the wild population.

Another sister, F1218, was chosen for release in 2014, paired with a young male, and formed the Hoodoo Pack in Arizona. She was not out in the wild long before she was illegally shot. The male, M1290, is still out there leading the Hoodoo Pack, a very successful wild family.

As F1217 was not successful in the breeding program, she was returned to Sevilleta to live when Cinderella replaced her at California Wolf in 2018. She lived there until her transfer to Southwest Wildlife this year.

Her house name at California Wolf was Terry, but she will be receiving a new name in the coming days. She turned 10 years old this year.

Mexican wolf M1228 was born at the California Wolf Center in Julian, CA on April 30, 2011. He was sent to the USFWS MGW facility at Sevilleta, New Mexico in 2014, in 2016 he was sent to the Cincinnati Zoo and Botanical Garden in Ohio on a breeding recommendation – which was not successful. He then went to the Albuquerque BioPark before coming to Southwest Wildlife.

M1228 has roots in the wild. Both of his parents were wild wolves. His mother, F1046, was born into the Aspen Pack in New Mexico. His father, M863, born at Sevilleta, was a pup when released to the wild with his family – the Saddle Pack. He later became the alpha male of the Aspen Pack.

In the Studbook it shows a house name of Wolfman Jack, but he will be receiving a new name in the coming days. This year he turned 10.

M863, his father, was born at the USFWS MGW facility at Sevilleta, New Mexico. He and his family were released to the wild (Blue Free) in August of 2004 and called the Saddle Pack.

He left the pack in 2006, ranging as a single wolf in the Gila National Forest (GNF) near his natal pack. After two depredations of calves were assigned to him, M863 was captured in March of 2006 and removed to Sevilleta. In December 2006, he was again released (“translocated” – back when they were still releasing captive born adult wolves) to the Apache-Sitgreaves National Forest (ASNF) south of Big Lake in Arizona. He remained there for only two days before returning 50 miles to the NW portion of the GNF in New Mexico.

The Aspen Pack alpha male AM512 was lost to follow up in the summer of 2006 and in February 2007 (breeding season) M863 was located with the alpha female of the Aspen Pack – AF667. Unfortunately, by November of 2007 he was in trouble again and was removed under a Removal Order for multiple depredations credited to the Aspen Pack. Other members of the Aspen Pack, including AF667 and her daughter F1046 (by former Aspen alpha AM512) were also removed and placed at Sevilleta with M863. From there the wolf family went to live at California Wolf. AF667 passed away not long after the move to California.

M863 and F1046 became a pair. Although both were part of the wild Aspen Pack when brought into captivity, they were not related. They remained together and became a very productive breeding pair. They had at least four litters of pups born in captivity at California Wolf. Our new wolf, M1228, was one of 6 pups born in the 2011 litter.