Wildlife Weekly: You Smell Them Before You See Them... 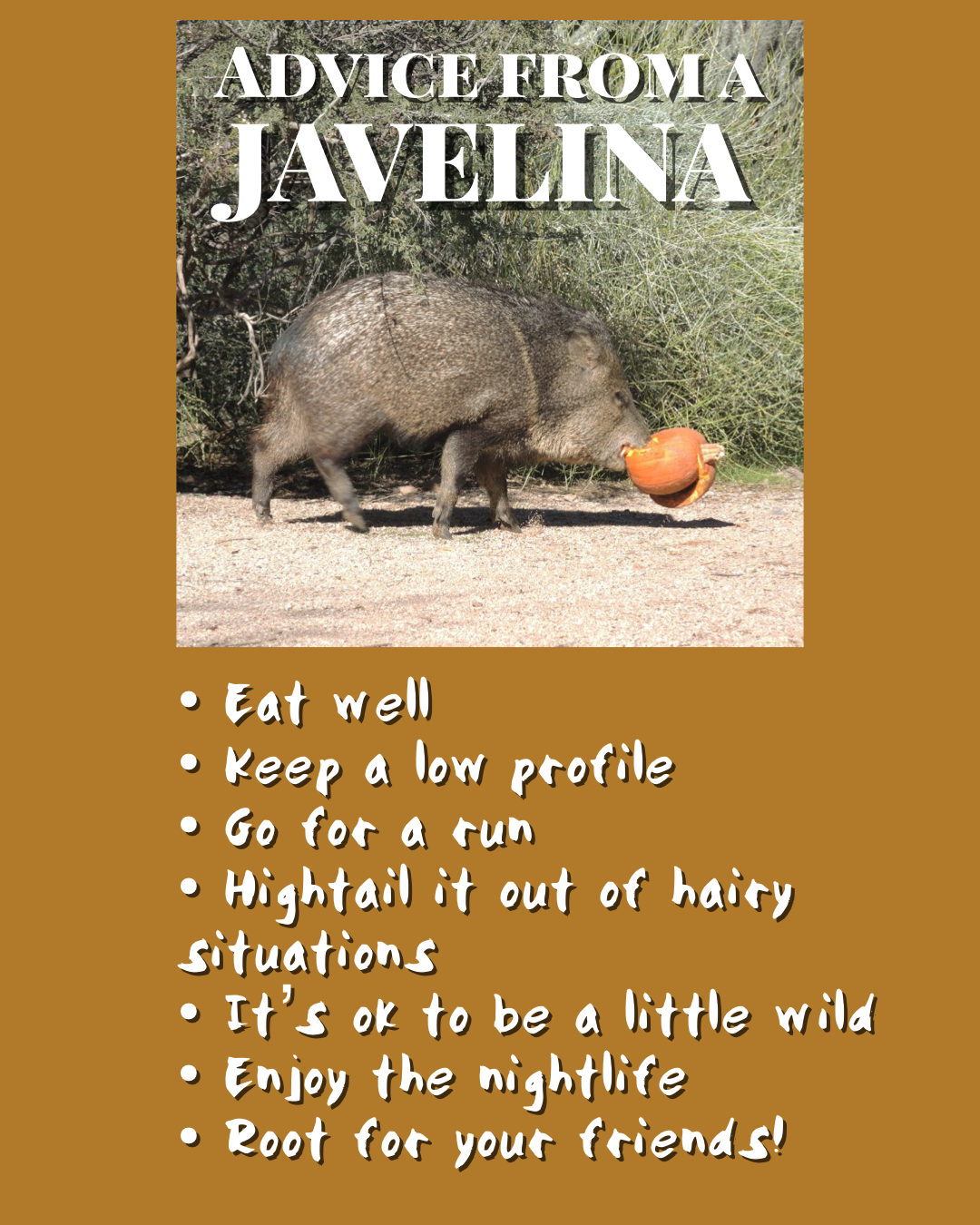 You can smell them before you see them. For many, that’s everything they know about javelinas. In fact, one of the javelina’s lesser known names is “skunk pig.” Technically, they are named “collared peccaries.”

But a javelina is not a pig at all. Although they look remarkably similar, there are some physical differences.

Peccary: Tails aren't visible, small ears, 38 teeth, three toes on hind feet, scent gland on their back above their tail

Javelina don’t smell anything like perfume. Au contraire; they have an unforgettable musky smell.

People who have approached them know javelinas smell; what they don’t know is that each javelina family has a unique smell!

Javelinas maintain very close social relationships, and scent is an important part of recognizing each other.

If you were to view a herd (or “squadron”) undisturbed for 30 minutes or so, you would notice their gregariousness, as they frequently rub against one another. At Southwest Wildlife, we call this the "javelina handshake.”

At Southwest we never get a whole herd in at the same time. That’s important to understand. We might get a baby, a few juveniles, some sub-adults, perhaps an adult or two, all from different herds.

How do we make them smell the same?

Southwest Wildlife Conservation Center is the only wildlife facility in the state of Arizona permitted to create new herds of javelina.

There is no magic number for how many javelina make up a herd. The only number it cannot be is: one.

Incoming baby javelina, or “reds” as they’re called, are grouped together right away. They rub against each other instinctively.

Sub-adults and adults are placed in individual enclosures, and over several weeks will rub against each other through the fence. By doing so, they create a hybrid scent and can be put together in an enclosure. Once a new ‘squadron’ is established, juveniles can be introduced.  The older members will rub against them, adding them to the group’s scent.

Building herds can take several months. Meanwhile, if you’ve ever seen a javelina eat you know they consume A LOT. Basically herbivores, in the wild javelina will eat roots, young shoots and prickly pear cacti.  At Southwest, they chow down primarily on raw vegetables.

Javelina are a prey animal monitored by the Arizona Game and Fish Department (AZGFD). Once a "squadron" has been fully established, we call AGFD to do the actual release back into the wild.

Never seen a javelina up close?

Come meet Lucky and Charm, our two “magically delicious” permanent resident javelinas.  Perhaps you’ll smell them before you see them!