Mange Coyotes: What are they? How can you help them? 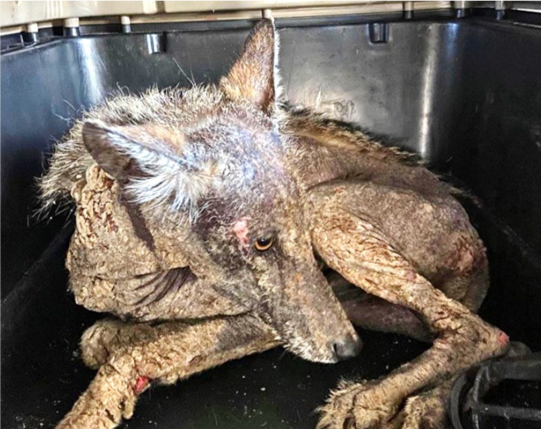 What is this animal?

Is it a dog? A wolf-dog? Or el chupacabra, the hairless “goat sucker” of Latin American legend?

If you’ve see this creature in your neighborhood, you have likely sighted a coyote - with mange.

Southwest Wildlife Conservation Center’s emergency line has seen an increase in calls regarding coyotes with mange.

Animals (not just coyotes) affected by mange will scratch themselves raw. This will often lead to secondary infections, which for a coyote is almost always a death sentence. The behavior of a mangy coyote may be abnormal. Thought basically nocturnal, you are more likely to see them during the day in and around your home looking for food.  They need that easy meal because they are too weak to hunt.

Some coyotes seem more prone to disease than others, but it is not clear why. However, the use of rodenticide (rat poison), specifically the active ingredient Warfarin, has been linked to susceptibility to mange.

Rat poison works as an anticoagulant that causes rodents to bleed internally and die. As the rodent weakens it can become easy prey for predators (like coyotes) that share their ecosystem.

When a coyote eats a poisoned mouse or rat, it too becomes poisoned.

Although the dosage may not necessarily be enough to kill it, over time it may compromise or suppress its immune system – making it a perfect host for those parasitic mites. (Are you feeling itchy yet?)

Earlier this year Sky Sanctuary Rescue (which specializes in rescuing at-risk animals, primarily street dogs) was called out to a south mountain neighborhood to rescue an ill-appearing dog.  After capture they realized it was a coyote, not a dog, and brought him to Southwest Wildlife.

The poor guy (we don’t give our releasable animals names) was fed twice a day to make up for the meals he’d missed.  He was treated for mange and given antibiotics for his secondary skin infections. Happily, he was recently released, fully healed, back to the wild.

Mice and rats are common in the Sonoran Desert.  But indiscriminate use of rodenticides can be harmful to more than just rats.  Use of rat poison may have unintended consequences for other wildlife.

Plus, coyotes, bobcats, foxes and snakes are all excellent at vermin control themselves.  And their services cost you nothing!

Should you see a coyote - or any native wildlife - in distress, please call our emergency line at (480) 433-5656 before attempting to help.